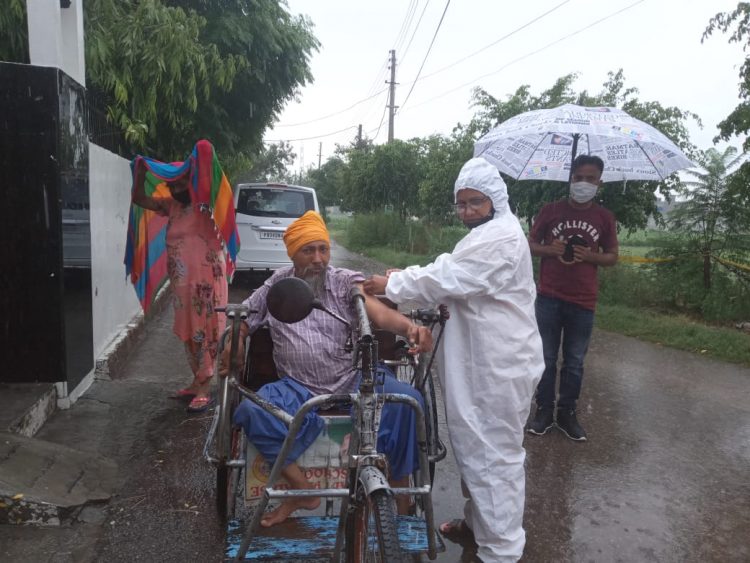 Jalandhar, July 13-(STN) As the special drive to inoculate specially-abled persons at their doorsteps has gained momentum in the district, as many as 949 such beneficiaries have received jabs of Covid-19 vaccine at their homes.

Divulging the details, Deputy Commissioner Ghanshyam Thori said that the district administration had started this drive a few days back with an aim to reach out specially-abled persons at their homes while offering them on-the-spot inoculation facilities. He added that all the SMOs have been working earnestly to ensure that every single PWD beneficiary was delivered Covid-19 vaccine dose at the doorsteps.
?
The DC stated that all the five SDMs have been personally monitoring the drive in their respective jurisdictions so that this mammoth exercise could continue unabated. He reiterated the district administration’s commitment to reaching out to all the beneficiaries to make them part of the biggest ever vaccination program launched by the state government.

Sharing the efforts being made by the health teams, Senior Medical Officer Jamsher health block Dr. R.P. Bains stated that the teams comprising Asha workers, ANM, and Vaccinators were not only delivering the doses to specially-abled persons but also creating awareness among the rural population towards the benefit of early immunization. “Our teams are visiting door to door to inoculate PWDs as directed by the DC and so far 339 beneficiaries have been delivered the dose of Covid-19 vaccines at their homes”, he added.

Similarly, SMO Adampur block Dr. Reema stated, “we have covered almost 95 percent of the PWD beneficiaries in our health block and only those left without vaccine shots who expressed their unwillingness to get a jab.” She mentioned that as many as 340 such beneficiaries including 50 on Tuesday have been covered so far.

Pointing out further, Additional Deputy Commissioner (Urban Development) Himanshu Jain stated that the health teams are making all out efforts in ensuring the 100 percent vaccination of the specially-abled beneficiaries by visiting them personally. He added that the drive would continue until the goal of maximum vaccination was achieved adding 339, 340, 30,160,20, 20, and 40 beneficiaries have been inoculated in Jamsher, Adampur, Shahkot, Lohian? Bara Pind, Shankar, Nakodar, and Jalandhar Urban health blocks to date.