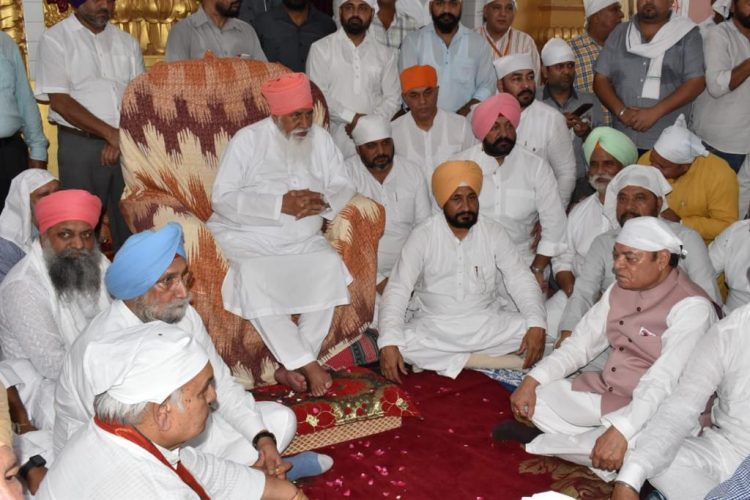 The Chief Minister, who was here to pay obeisance at Dera Sachkhand Ballan along with Deputy Chief Minister Mr Sukhjinder Singh Randhawa, said that the chair will be set up adjoining the Dera and will be managed by the Dera itself. He said that the government will ensure operation and maintenance of the chair for the coming ten years. Mr Channi envisioned that this state of the art chair will emerge as a huge research centre on life and philosophy of Sri Guru Ravidass Maharaj ji.

The Chief Minister also said he will lay the foundation stone of a museum dedicated to Baba Sahib Dr BR Ambedkar at Kapurthala on Thursday. Likewise, he said that a management college on name of Baba sahib will also be set up in the state. Mr Channi said that due focus will be laid on imparting quality education to people instead of other freebies.

The Chief Minister said that he is fortunate to have got an opportunity to offer prayers at this sacred land after assuming the office. He said that this blessed land has always been a source of inspiration for millions of followers of Sri Guru Ravidass Maharaj ji who had preached the lesson of egalitarian society to entire humanity. Mr Channi also said that he has got solace and peace of mind by visiting this holy place.

The Chief Minister also lauded the role played by Dera in social and economic well being of the masses. He said apart from connecting the people with teachings and philosophy of Sri Guru Ravidass Maharaj ji the Dera has always remain instrumental in imparting quality education and health services to the needy and underprivileged sections of society. Mr Channi also lauded the philanthropic services rendered by the Dera for the well being of the masses.

Earlier, Lok Sabha MP from Jalandhar Chaudhary Santokh Singh welcomed the Chief Minister to Dera. He said that it is a moment of pride for all of us that the Congress party has appointed Mr Channi as the Chief Minister of the state.

On the occasion the chief of Dera Sant Baba Niranjan Dass felicitated the Chief Minister with a shawl and siropa.