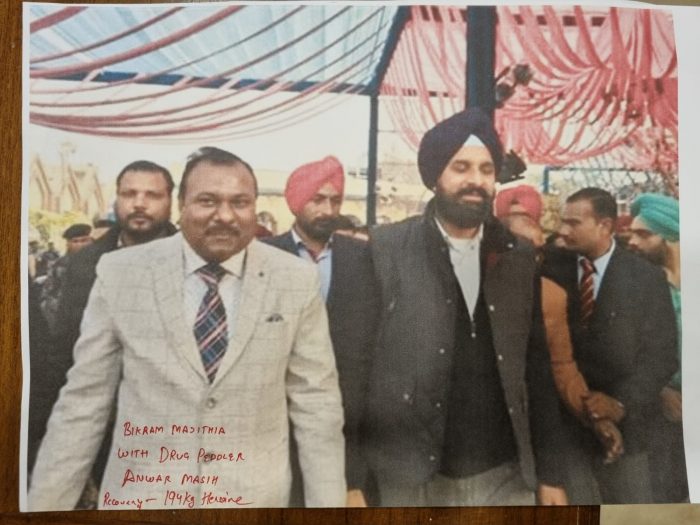 Chandigarh, January 22:(STN) Reacting strongly to the baseless and frivolous allegations levelled against him by SAD leader Bikram Majithia, Chief Minister Charanjit Singh Channi on Saturday dared him to present even a single proof that indicates his involvement in sand mining across Punjab.

“I have never denied my relationship with my nephew Bhupinder Singh Honey and being a relative he might be present at some of my functions. It is not a crime, if I get clicked with my relatives at my son’s marriage or some other functions,” CM said while categorically denying his any link in Honey’s money laundering case investigated by Enforcement Directorate.

Lashing out at Majithia for the slanderous and misleading campaign against him, CM Channi said that Majithia is dancing on the tunes of the BJP government and is trying to take revenge from him for booking him in an NDPS case as earlier former CM Captain Amarinder Singh, who is in cahoots with SAD-BJP, had covered up his sins.

Lambasting Majithia, CM Channi said, “Let me remind Majithia that he was investigated by ED for his relations with drug peddlers and a drug kingpin named him for sheltering and facilitating smuggling of drugs. Majithia’s photos were with them, does it mean he knew them and sheltering them?”

CM asked Majthia, former CM Parkash Badal and his son Sukhbir to clear their stand that what relationship they have with notorious drug peddlers including Anwar Masih, Bittu Aulakh, Jagdish Bhola, Gurdeep Ranu, Satpreet Satta, with whom they usually shared political stages and had also attended public functions with them.

“Being a CM I get clicked with thousands of people every day, does it mean, I am linked to them?” he questioned Majithia, who is a brother-in-law of SAD President Sukhbir Singh Badal and being investigated for running drug peddling business and sheltering drug peddlers.

Majithia, who has annihilated the future of Punjab’s youth during SAD-BJP governance for 10 years, now questioning his integrity is amusing, CM said.

Reacting on audio recordings of the Salapur village Sarpanch Iqbal Singh and his son Binder naming CM’s name, Channi said that if a person is taking his name being CM for personal gain, it doesn’t mean that he is associated with them.

“They all are afraid and annoyed of me for selfless working for four months and spending government funds on the welfare of people, which they want to utilize on building their muti-crore empires,” Channi said.