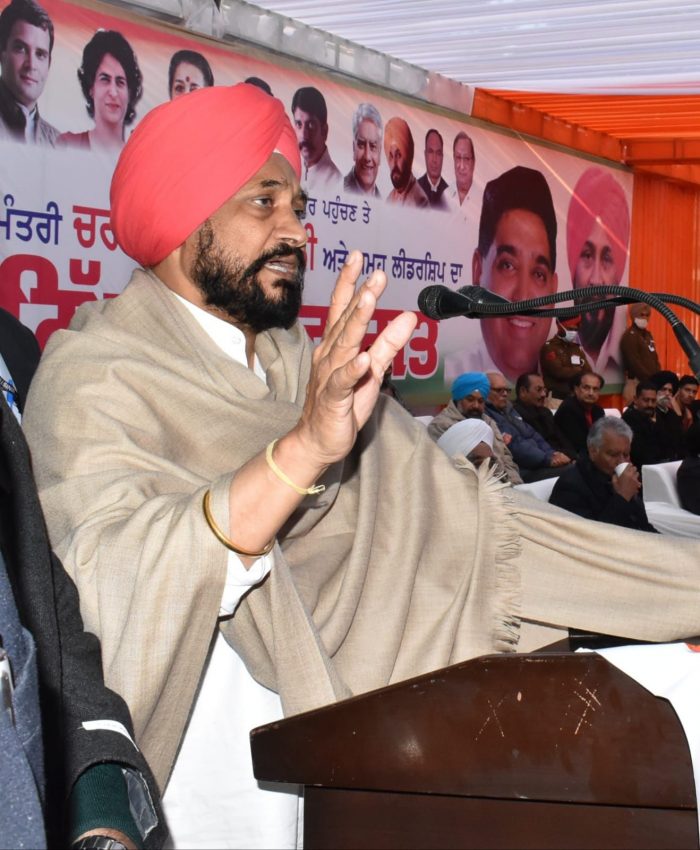 Congress government committed for carving out an egalitarian society

Addressing the gathering here at local Roshan ground, the Chief Minister said that AAP leadership is eyeing the wealth of Punjab due to which its leadership is showing ‘green pastures’ to people. He dared Kejriwal that before rolling out his bundles of lies before Punjabis he must dare to announce cheap power and petrol to residents of Delhi online of what Punjab government has done. CM Channi said that AAP leadership should understand one simple thing that proud Punjabis will not allow any outsider to rule them.

Lambasting Kejriwal for hypocrisy, the Chief Minister urged the people to remain cautious from his nefarious plans to grab power. He said that Kejriwal’s promises vary from state to state as per his own whims and fancies. Citing example, CM Channi said that in Punjab he is promising allowance worth Rs 1000 to women every month but in Goa the same allowance promised by him is Rs 5000 whereas in Delhi he is offering nothing to the ladies.

The Chief Minister further said that Punjab has witnessed a revolutionary change as for the first time power has been given to a common man like him instead of a Royal or affluent person. He said that his government aims to ensure equal opportunities to all and access of everyone to the resources of the state. CM Channi said that gone are the days when only Badals have access to power during which they looted it fully adding that now time has come when resources are being used for well being of people.

The Chief Minister said that in consonance with the life and philosophy of Sri Guru Ravidass ji the state government is working hard to carve out an egalitarian society. He said that every decision is being made to ensure holistic development of every strata of society and prosperity of its people. CM Channi said that sole aim is to make Punjab a front ranking state in country.

The Chief Minister said that people of state know that Petrol and diesel was cheapest in Punjab in entire northern region and likewise rates of power are cheapest in the entire country. Listing the several pro-people initiatives taken by his government, he said that Power bill arrears worth Rs. 1500 crore have been waived, Power rates for domestic consumers have been reduced by Rs. 3 per unit, Bills to the tune of Rs. 1200 crore have been waived off in respect of motors in rural areas, water charges brought down to Rs. 50 and Rates for sand have been reduced a lot. “We will continue these pro-people initiatives so that maximum welfare of society is ensured” added CM Channi.

In his address former MP Mr Sunil Kumar Jakhar said that conspiracies are being hatched against the state. He said that farmers were labelled as terrorists by the supporters of the draconian farm laws. Mr Jakhar said that now heinous efforts are being made to divide the people on sectarian lines.

The former Lok Sabha member said that people of state have to beware of these nefarious designs. He said that the Modi government needs to be taught a lesson for unprecedented inflation and anti-farmers stance adding that those who have anti Punjab mindset are making desperate efforts to grab power in state. Mr Jakhar envisioned that Congress government in 2022 will act as a stepping stone for formation of Congress government at the centre. He also lauded the Chief Minister for taking several path breaking initiatives for well being of people.