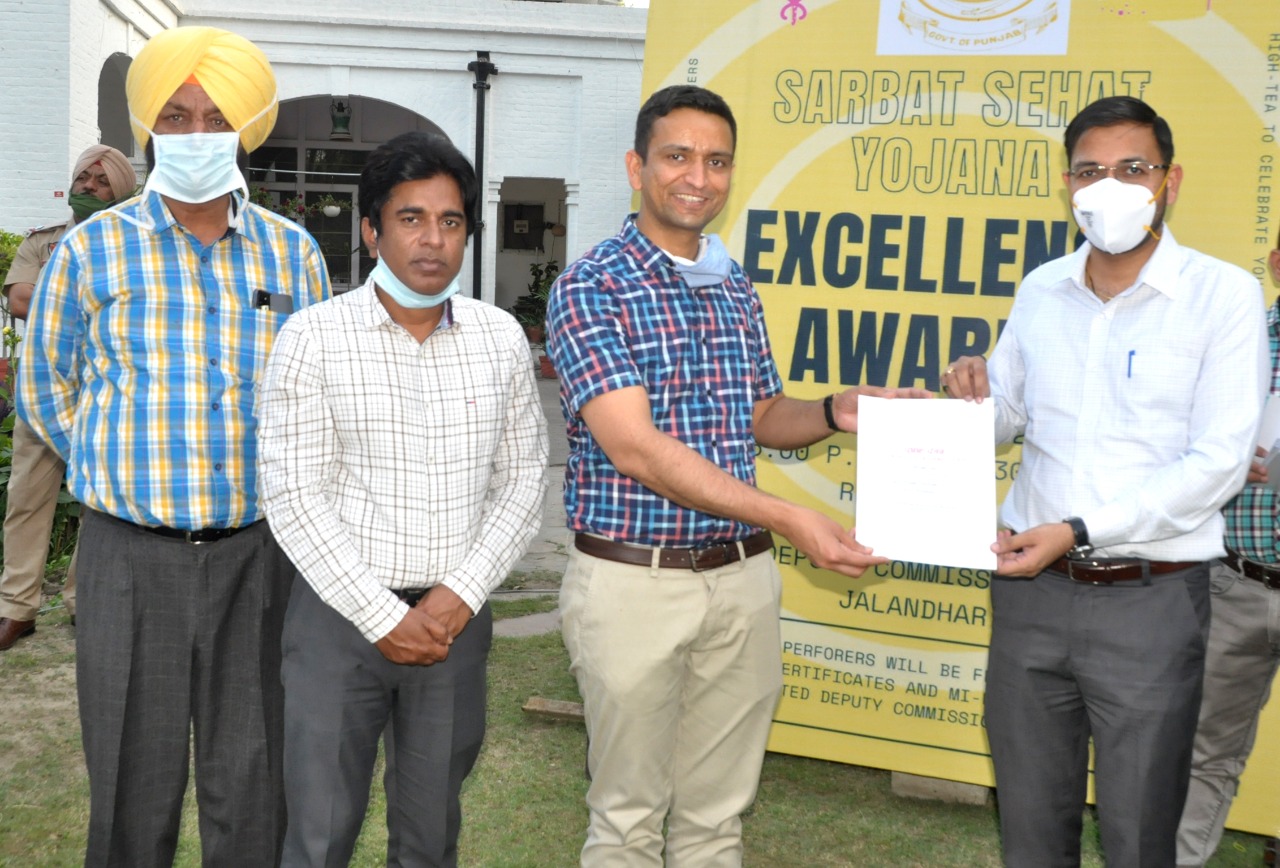 JALANDHAR TOPS IN SARBAT SEHAT BIMA YOJNA FROM 13TH RANK IN ONE YEAR, ALSO EMERGES AS BEST PERFORMER IN GHAR-GHAR ROJGAR AND OTHER MAJOR SCHEMES IN LAST ONE YEAR

Jalandhar, June 13(STN) Deputy Commissioner of Jalandhar, Sh. Ghanshyam Thori has completed one year in the office, wherein he has achieved new milestones amid the Covid-19 pandemic, especially accelerating development projects in these trying times. His dual approach towards governance – managing COVID on one hand and accelerating the implementation of key government schemes – have enabled Jalandhar to achieve significant socio-economic progress in the period of just one year.

Jalandhar has also emerged as a leader in the state government’s flagship programs under the leadership of Ghanshyam Thori, who took over as Deputy Commissioner on June 14, 2020. In all major parameters of the government, Jalandhar has continued to achieve and remain in the top three rankings of the State. In fact, under the leadership of Mr Thori and his team, Jalandhar has also achieved significant improvement in the implementation of MGNREGA in Jalandhar which has been a historical laggard in this space owing to its thriving emigrant population.

Ghanshyam Thori had assumed the charge amid the new challenges posed by the Covid-19 pandemic, which had taken the whole nation in a storm. It was an uphill battle to manage such a vast district which is also an NRI hub leading to a heavy influx of people from abroad.
Mr. Thori worked round the clock on capacity-building measures to revamp the healthcare infrastructure in the district, which helped in tackling the second wave efficiently. Jalandhar was unfortunately the only major node in the State which was catering to critical COVID patients without a fully functioning medical college. Along with SDRF Funds, Mr. Thori’s commitment to the vision of the Chief Minister encouraged him to mobilize CSR funds which were used to develop a complete tertiary care infrastructure in the Civil Hospital – Jalandhar making it no less than a medical college in providing treatment to patients across the Doaba region and also to needy patients from the neighbouring States and UTs such as Himachal Pradesh and Jammu & Kashmir. Extensive CSR engagements to expand Level 2 and Level 3 hospital capacity in Civil Hospital, Jalandhar besides succeeding in persuading private hospitals to establish their PSA plants. Over the last year, Jalandhar district has established the maximum increase in the capacity of PSA plants compared to all major districts.
As a result, Jalandhar is not only able to support its patient load but also supporting the COVID patient load from Delhi NCR, Himachal Pradesh, Haryana, and Northern Rajasthan.

A sum of over ₹1 Crore was mobilized under CSR to augment the COVID infrastructure and supplement costs of treatment of those who were unable to afford the same. Over 150 individuals have benefitted from the financial support extended by the district administration during the COVID crisis over the last year.

DC Ghanshyam Thori has emphasized focus on the public delivery system by designing and implementing the “Zero Pendency Approach ” in Jalandhar District. The initiative has ensured that less than 0.01% of cases are pending in the district beyond the stipulated time frame of public service delivery. The approach is also under consideration in the final round of the Prime Minister’s Award for Excellence in Public Service Delivery and Public Grievance Redressal. It is the only district in Punjab to be in contest for this award over the last one year. The process innovation has also been awarded with the Skoch Award 2020. Currently, the processes under the approach are also being replicated in other districts of Punjab to reduce the pendency of applications for public services in the State

Under the leadership of DC Ghanshyam Thori, rigorous efforts were made to implement all flagship schemes of the state government like MGSVY, Ghar Ghar Rozgar, Debt Relief programme for farmers, Guardians of Governance, MGNREGA, House for homeless, etc.

The district has taken a giant leap in Sarbat Sehat Bima Yojna to the number one position from the earlier 13th rank by achieving a remarkable 40% coverage in a span of just three months, that too during the COVID 19 pandemic. Similarly, Jalandhar consistently ranks among the top 3 districts on the monthly progress report of the State in terms of generating employment across the State of Punjab through Mega Job Fairs.

Jalandhar has also become a top performer in various developmental schemes including Smart Village Campaign (Phase I and II) and Urban Environment Improvement Program (UEIP) – Phase I and Phase II. While all work of Phase I is on the verge of completion, over 35% of the work in UEIP Phase II has also been simultaneously completed under the direct supervision of the DC. The district was also able to meet all its flood mitigation development works in time. Furthermore, PIDB, RDF, MPLAD works were regularly monitored to drive execution, and UCs were collected and sent back in time using technology driven dashboards and data analytics to identify weak spots for intervention.

DC has made disposal of revenue cases fast-tracked in the district with dedicated involvement from all concerned stakeholders. Currently, pendency is only there for 40 odd cases most of which came to the court after the suspension of court work due to the second wave of the COVID 19 pandemic, which will also be cleared after the court work resumes. Over 140 cases which were pending since last year has already been disposed off by the DC earlier.

“Though the Jalandhar administration has witnessed various challenges in the past one year owing to COVID-19, my diligent team members have supported me to perform my job well. I also want to thank all residents of Jalandhar for their cooperation and understanding,” said Ghanshyam Thori, DC, Jalandhar.

The Deputy Commissioner proposed construction of a Railway under Bridge at Tanda Road Railway Crossing, which received sanction from the higher authorities.

Oxygen Concentrators’’ bank was set up at the Red Cross Society, which provided more than 110 patients oxygen support for home care at affordable prices not just in Jalandhar but also for needy patients across the neighbouring districts.

Streamlined oxygen supply in the District by deploying police personnel at oxygen generation plants. Also, motivating private hospitals to install their PSA-based oxygen plants as a result around seven major hospitals have set up plants.

To curb profiteering, black-marketing, and malpractices during the Covid-19 pandemic, the DC announced Rs. 25k reward for those exposing these faults. Felicitated scribes for conducting a sting operation against such malpractices besides lodging FIRs against offenders.

Jalandhar was the first district to grant relaxations to business-related activities while ensuring the reduction of Covid-19 cases at the same time. The extra 5 hours of operation for businesses was a boost to the economy of the State as it helped increase economic consumption and revenue collection. At the same time, Jalandhar consistently maintained a reduction in the number of COVID cases as well as COVID deaths in the district.

Focussed efforts of the district administration under the able leadership of the DC was pivotal in establishing Jalandhar as a developed COVID treatment hub in the State even without a medical college. The district witnessed a constant reduction in CFR going from the 7th rank in the State last year to the 18th rank in the State as of last week. Jalandhar has also been able to vaccinate over 5.80L people, second only to Ludhiana district in the State.