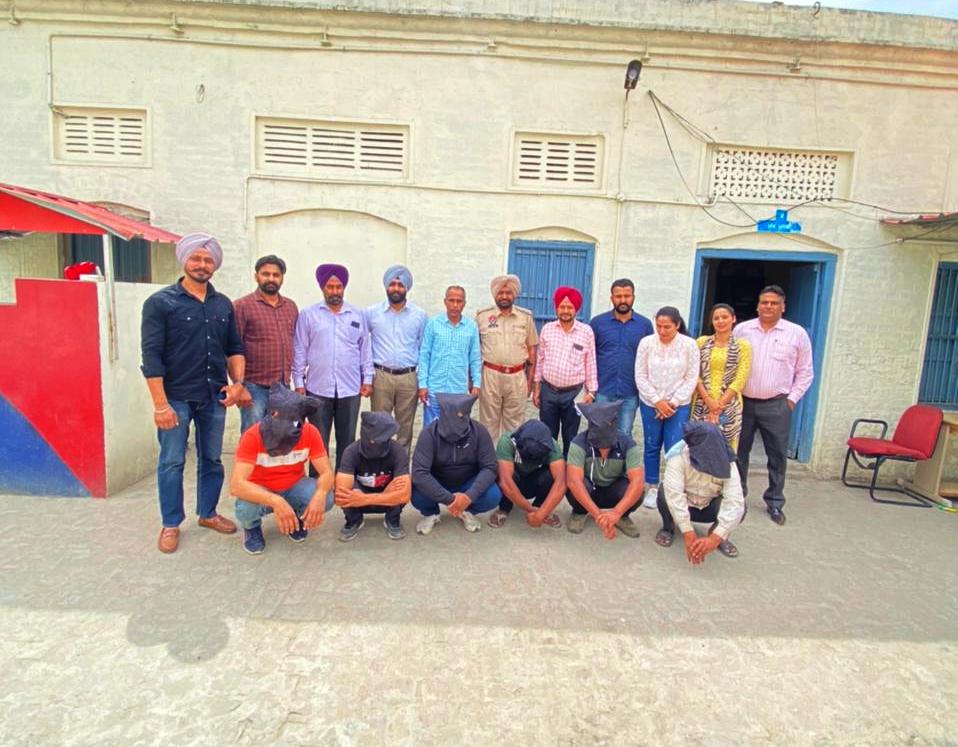 Hoshiarpur:14,April(STN) As part of the crackdown on drugs and smugglers, the Hoshiarpur district police nabbed six smugglers along with two tankers loaded with spirits and three cars and recovered 40,000 liters of chemical spirits. He said that the arrested gang was making fake drugs and poisonous liquor from this spirit which is very dangerous for human health.
The spirits were to be transported by tankers from a factory in the town terrace bordering Talwara police station and by tankers. Used to supply at Baddi.
S.S.P. Disclosing this here today Navjot Singh Mahal said that Under the direction of DGP, Punjab Dinkar Gupta, the campaign against drug smugglers has been a great success for the district police. He said that SP (D) CIA under the supervision of Ravinder Pal Singh Sandhu. Incharge Shiv Kumar and S.I. The police party including Nirmal Singh nabbed the six smugglers who were stealing spirits from tankers parked in the gorge of village Baringli police station Talwara and putting them in plastic cans. He said that the accused have been identified as Narinder Lal alias Rinku resident of Sohal police station Dhariwal Gurdaspur, Rakesh alias Baba resident of Gangwal district Kangra Himachal Pradesh, Gurcharan Singh alias Shinta resident of Tanda Churian police station Hajipur, Gurwinder Singh resident of Jhugia police station Julka district Patiala, Dara Khan resident Gardi Nagar. Police Station Shambhu District Patiala and Dinesh Residents Old Population Avakhan Police Station Dina Nagar District Gurdaspur.

Navjot Singh Mahal said that on the basis of intelligence information, the police party raided and arrested the smugglers and also recovered a car I-20 PB. 10 cans of Chemical Spirit from 23R0254, 5 cans of Chemical Spirit from Car Honda Civic number PB-74-81 and Car SX. No. 4 UP. Five cans of chemical spirits were recovered from 14 AM 2556 and tanker number PB11-CL4049 was also seized. He said that the tanker PB. The 10DZ1147 was captured by its driver breaking the tanker’s lid seal and attaching the lid. Police have registered an IPC case in Talwara police station. A case has been registered under sections 379, 380, 328, 420 of the IPC and section 61/63 / 78-1-14 of the Excise Act.
During the interrogation, it was revealed that they were making fake drugs from this spirit and selling them to the people as good liquor. S.S.P. Various police parties have been set up to nab Rohit Vasi Sohal, the ringleader of the gang, who is still a fugitive. A total of eight cases have already been registered against accused Narendra Lal under various sections of the Arms Act and Excise Act while three cases have been registered against Rakesh alias Baba under the Excise Act.