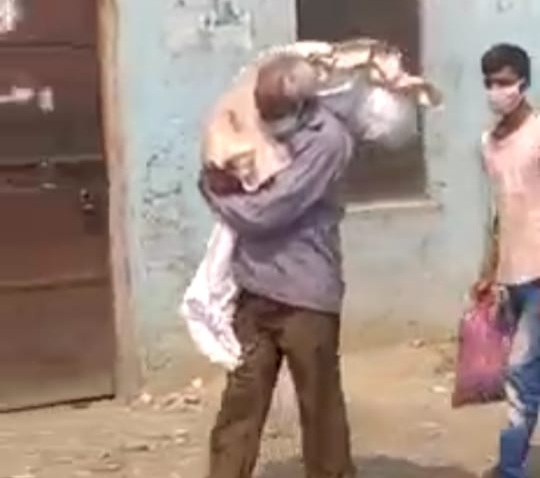 Jalandhar: 15, May (STN) Humanity has been seen to be ashamed many times due to Corona epidemic because this epidemic is a disease which is not even known when it takes someone under its control and humanity is ashamed for fear of it. An 11-year-old innocent died due to corona and no one came forward to support him and his elderly father carried him on his shoulder to a cremation ground. Corona of 11 year old Sonu from Ramnagar Died and as soon as people found out that the girl was Corona, no one came forward to give her a shoulder and her elderly father carried her on his shoulder to the crematorium whose video went viral. Since then there has been a stir in the administration as it is a great administrative negligence and shameful pictures of humanity although the administration has made a lot of preparations due to the corona epidemic and at such a time if someone dies due to corona So the responsibility of cremating her is borne by the administration itself but on the contrary a father has to take care of his daughter For the cremation, he had to carry it on his own shoulders to the cremation ground

Dilip Kumar, father of Mritika Sonu, said that Civil Hospital Jalandhar had referred his daughter to Amritsar where he got a bottle of blood worth Rs. Dilip said that when he returned home, the neighbors also told him clearly that his child had died due to Corona so no one would touch his child. He had to make the arrangements himself and he had no choice but to carry his baby on his shoulders to the cremation ground.

The corona epidemic has made everyone selfish. As soon as someone finds out that another person is corona positive, they start discriminating against him to such an extent that they also break social relations with that corona patient. There is a fear of the consequences of the epidemic and the other when he breaks social relations with the people he loses his courage and such pictures are seen which make man fall from the eyes of humanity.