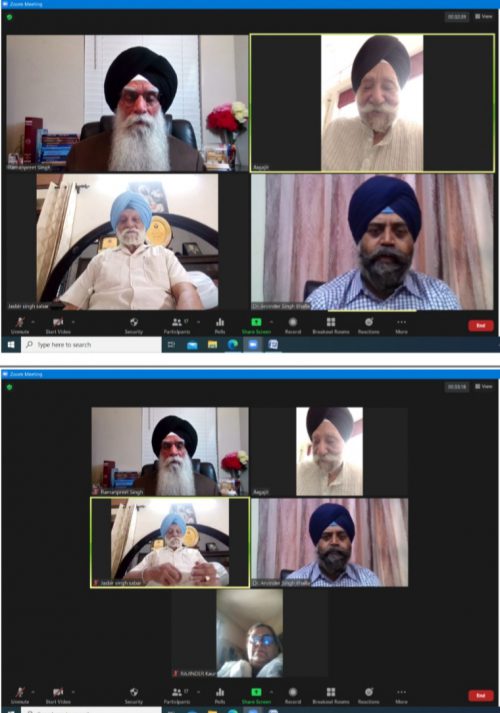 Ludhiana, April 28-(STN) Gujranwala Guru Nanak Khalsa College, Civil Lines, Ludhiana organized a webinar on “Sri Guru Teg Bahadur Ji de Hukamname ” on Tuesday in order to commemorate his 400th birth anniversary. Dr. Arvinder Singh Bhalla, Principal, Gujranwala Guru Nanak Khalsa College, Ludhiana welcomed the guests and said that the hukamnamas of sikh gurus are a significant source of sikh history and these are a valuable source of evidence on the life and works of the gurus. Sri Guru Teg Bahadur Ji has made a significant contribution to Gurbani which should be brought to the notice of the world through these kinds of events.
The first resource person was Dr. Jasbir Singh Sabar, Former Head, Department of Guru Nanak Studies. He He explained the importance of hukamnamas of Sri Guru Teg Bahadur ji and these are addressed to whole humanity rather than single community or religion. These are coded messages which should be decoded and followed by humanity. These have significant contribution in religious, social and economic life of Sikh Sangat.
The second resource person was Dr. Anurag Singh, Former Director, Sikh Itihas Board, Shrimoni Gurudwara Prabandhak Committee, Amritsar. He described in depth that there are total 29 hukamnamas of Sri Guru Teg Bahadur ji which include the names of 161 persons. These hukamnamas throw a light on the life and activities of the Gurus, on the institution of Sikh Sangat and the socio-religious life of the sikhs. They also contain implicitly a few references to historical incidents.
The third resource person was Dr. Mohan Singh “Rattan”, Retired Editor, Punjab State University Text Board, Chandigarh. He described the genuineness of the hukamnamas and they help us in understanding how Sri Guru Teg Bahadur ji asserted his authority as a Guru. He asserted that further research should be conducted in this field. He also explained the meaning of the word “Masand”.
In his presidential remarks, Dr. S. P. Singh, Former Vice Chancellor, Guru Nanak Dev University, Amritsar and Honorable President, Gujranwala Khalsa Educational Council dwelt upon that the we have been unable to provide true perspective of the hukamnamas. Truth about the hukamnamas should be unveiled and a true picture about them should be framed.
Prof. Rajinder Kaur Malhotra, Vice- Principal, Gujranwala Guru Nanak Khalsa College, thanked the participants and appreciated the views expressed by all the eminent speakers. He also applauded the efforts of the organizing team of the webinar Prof. Gurvinder Kaur and Prof. Manpreet Kaur.’