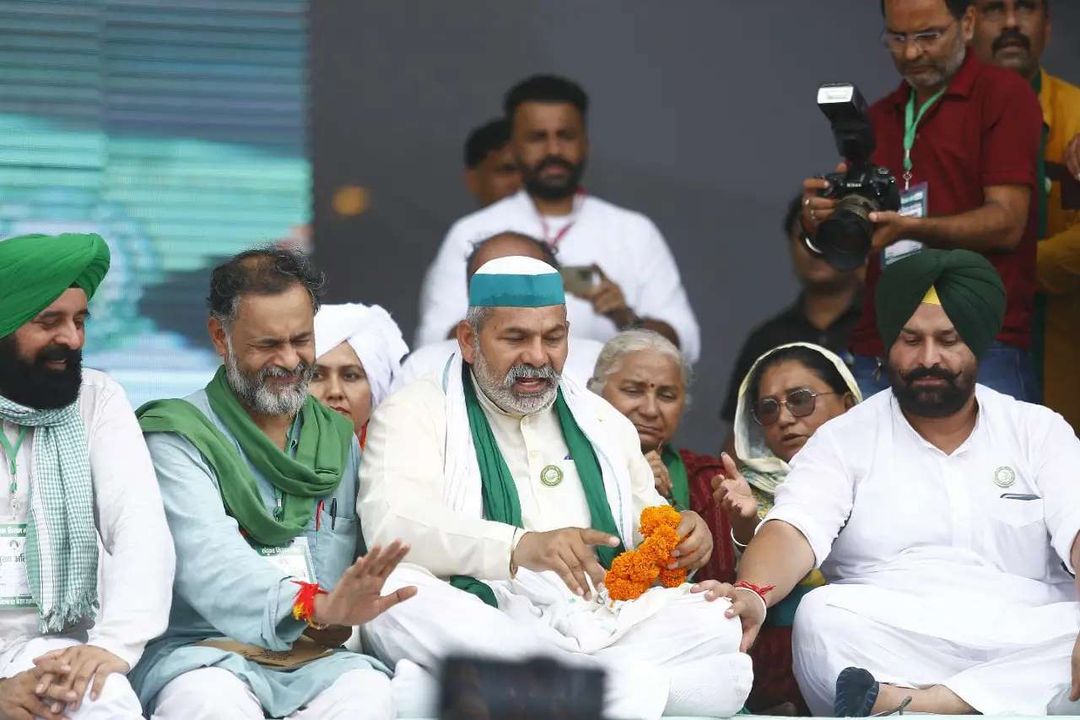 Muzaffarnagar: September,5(STN) The historic Kisan Mazdoor Mahapanchayat of more than one million farmers across the country was organized by SKM in Muzaffarnagar today, September 5.
A large number of farmers started arriving from yesterday evening. The huge GIC ground was filled with millions of enthusiastic and determined farmers since this morning. All the roads leading to the rally grounds were filled with caravans of thousands of farmers. There was still an endless flow of people, tractors, cars, buses in Muzaffarnagar. The entire city of Muzaffarnagar was turned into a rally ground.
The sea of ​​people who cut across states, religions, castes, regions and languages ​​united to deliver a loud and clear message to the BJP governments at the Center and the state.

The Kisan Mazdoor Mahapanchayat received unparalleled support from all sections of the society. Millions of farmers had to wait to hear the speech outside the field, where a public speaking system was set up for several kilometers.
Millions of farmers came from Uttar Pradesh, Uttarakhand, Punjab, Haryana, Rajasthan, Madhya Pradesh and many other states of the country. These included West Bengal, Assam, Bihar, Kerala, Tamil Nadu, Karnataka, Andhra Pradesh, Telangana, Maharashtra and other states. Women and young farmers came in large numbers. It was probably the largest farmers’ rally ever in India. Farmers were carrying thousands of national flags, as well as flags of their farmers’ organizations. It was a very colorful scene.
During the rally, loud slogans of farmer-worker unity and defeat of the anti-farmer BJP government were called. Hundreds of langars, medical camps and mobile clinics were set up to help the farmers who came from all over.
Muzaffarnagar Kisan Mazdoor Mahapanchayat launches United Kisan Morcha Mission Uttar Pradesh-Uttarakhand to repeal 3 agricultural laws and strengthen central farmers’ struggle to ensure MSP at 2 + 50% Will do, and will leave no stone unturned. No stone will be left unturned to ensure a resounding defeat for the BJP in the forthcoming Assembly elections. All the spokespersons said that the peasant-labor agenda would overcome the communal and casteist politics of the BJP-RSS. The Kisan Mazdoor Mahapanchayat announced that the farmers would never allow communal riots in the future. The peasant movement will always chant the slogan of strengthening Hindu-Muslim unity.

The Samyukta Kisan Morcha said that the Uttar Pradesh government was following the British government’s ‘divide and rule’ policy and communal policy of caste and religion. The Morcha said that it was sending a warning to the Mahapanchayat Center and the state government. Despite the rally of lakhs of farmers with the support of all castes, religions and sections, the agitation will be intensified if the government does not repeal the three agricultural laws and does not provide legal guarantee for the procurement of agricultural products. Front leaders said a struggle on the issue of unemployment would be planned soon.
The Samyukta Kisan Morcha said that the promises made by the Yogi government to the farmers were not fulfilled. Even the promised 20% procurement has not been fulfilled. The UP government had promised loan waiver for 86 lakh farmers, while only 45 lakh farmers have received loan waiver. The CACP, a central government agency, has found that the cost of sugarcane was Rs 383 per quintal in 2017, but farmers were paid Rs 325 per quintal, and sugarcane mills owe farmers Rs 8,700 crore. In Uttar Pradesh, crop insurance was paid to 72 lakh farmers in the year 2016-17, whereas in 2019-20, only 47 lakh farmers were paid, where the crop insurance companies made a profit of Rs 2,508 crore. Had happened. The Kisan Mazdoor Mahapanchayat decided to announce agitation at the next meeting of SKM demanding Rs. 450 per quintal for sugarcane as promised by the Uttar Pradesh government.