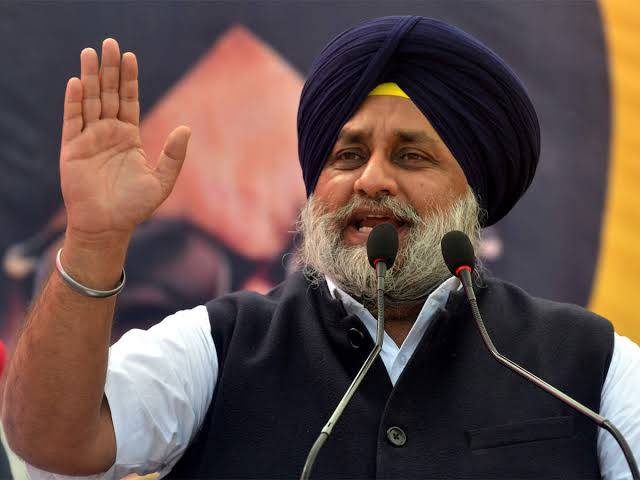 “Nothing happened on the ground, people were left to die in their condition with no oxygen, ventilators and ICU facilities”

He said that while Punjab was on fire, the Chief Minister had locked himself in his farmhouse

Mullanpur, April 23:(STN) Shiromani Akali Dal President Sardar Sukhbir Singh Badal today said that Chief Minister Capt. Amarinder Singh had not only mismanaged the wheat procurement process but he had also failed to provide basic facilities to the corona patients due to which Punjab The death rate is the highest in the country. He also demanded an impartial central inquiry into the Congress government’s claim that Rs 1,000 crore had been spent on dealing with Corona and said that nothing had been done at the grassroots level.
The SAD President who visited the local mandi also interacted with the farmers who told them that they were facing difficulties due to non-lifting of wheat and no effort was made to get the wheat procurement process on track. . The farmers also complained about the lack of bags and said that the wheat procured by the government agencies was not being paid.
Mr. Sukhbir Singh Badal said that it seemed that the Congress government had committed another scam in the name of dealing with Corona and spending Rs.1000 crore for the improvement of hospital infrastructure. He said that there should be an impartial inquiry into the whole matter whether money was spent on improving the infrastructure of the hospitals and whether the required medical facilities were provided to the patients. He said that the patients were not getting adequate oxygen, ventilator, ICU facilities and even medicines. He said that people were lying in front of the hospitals but the state government was not having any effect on Capt. Amarinder Singh. He said that at a time when the state was on fire, the Chief Minister had locked himself in his farmhouse.
Mr. Badal challenged the government to explain how Rs.1000 crore had been spent in the last one year to deal with Corona. He said that there was no change at the ground level and only two districts had provided ICU facilities in the district hospitals. He said that the demand for ventilators was still not being met and the ventilators provided by the central government had been shut down for several months. He said that life saving vaccines like Toklizumb and Etolizubal and Remedisvir were not only available but also common medicines were not available in the hospitals. He said that this was the reason why people were leaving government hospitals and turning to private ones and it was becoming difficult to take care of so many patients in private hospitals.
Mr. Badal asked the Chief Minister to get out of his farmhouse and take care of the situation. He said that it was very unfortunate that we had a Chief Minister who had not visited Punjab for two years. He said that this was the reason why no corrective action was taken for the welfare of the people. He said that people in the state have been left to their own devices.
Meanwhile, the Akali Dal president asked all the leaders and workers of the Akali Dal to reach out to the mandis and help the farmers to the best of their ability. Mr. Badal was accompanied by senior leaders Mr. Manpreet Singh Ayali, Mr. SR Clare, Mr. Balwinder Singh Sandhu and Mr. Gurcharan Singh Grewal.