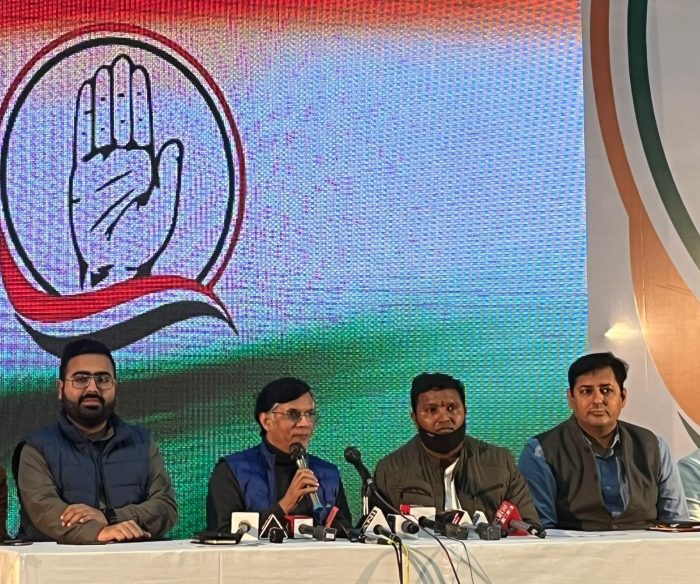 Chandigarh: January,30(STN) All India Youth Congress President Srinivas BV on behalf of All India Youth Congress addressed a press conference at Punjab Congress Headquarters in Chandigarh. During this time, Delhi Chief Minister Arvind Kejriwal and the Aam Aadmi Party are spreading lies and deception in Punjab by stating false reality of the Delhi model. This press conference was conducted by the spokesperson of Congress Party, Shri Pawan Khera.

while addressing the press conference Srinivas said that Delhi Chief Minister Arvind Kejriwal and the Delhi model being presented by his party is a model of lies and deception. The model in which about Rs 490 crore was spent by Kejriwal for his self promotion. He revealed that neither BED nor oxygen cylinders were available for the people in Delhi during the Corona second wave of Corona. The official figure of 25000 deaths in Delhi but The dead bodies that were cremated by his team was more than 500 itself and even had to wait for two days to cremate the dead body. The sound of an ambulance could be heard every ten minutes. But in these circumstances, Kejriwal was entering his house wearing a mask.

He revealed that only 16000 people died of corona in Punjab under those conditions as compared to Delhi. Kejriwal is lying about the model of Delhi. In Delhi, people had to be admitted to a private hospital due to lack of space in the government hospitals, whereas people got good treatment in government hospital in Punjab. Even the migrants were forced to migrate from Delhi. Similarly, he also exposed AAP’s claims regarding Mohalla Clinic and told that there is not any doctors and nurses but workers of Aam Aadmi Party are living there. Similarly, these people did not fulfill the promise made to the people of Delhi regarding employment, education and other issues.