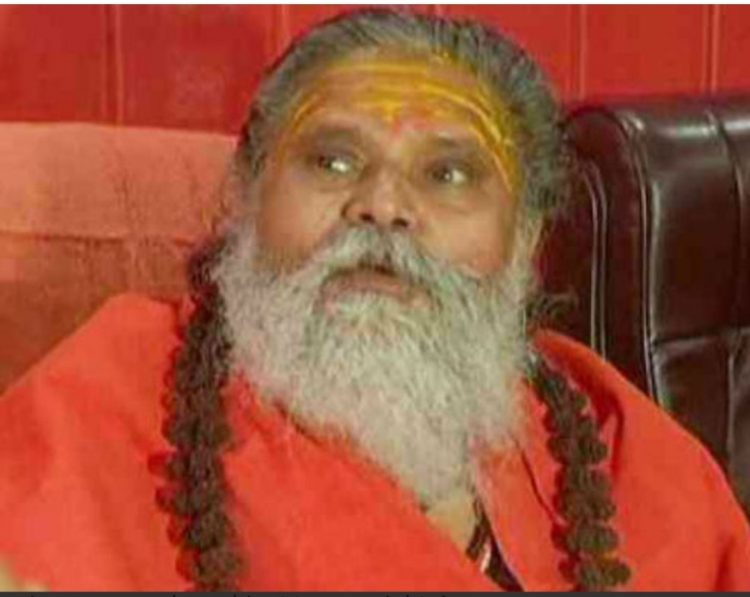 Allahabad/Prayagraj, 20 September (STN) : For several decades, the head of the Akhara Parishad, Narendra Giri, who has been hoisting the saffron flag of Sanatan across the world, has died. Mahant Narendra Giri has died in a suspicious condition and he has been found hanging on the noose. After the death of Mahant Narendra Giri, not only the Sant Samaj but the whole country is shocked. No one can believe that Mahant Narendra Giri, the head of the Akhara Parishad, is no longer among them.
Narendra Giri, the head of the Akhara Parishad, was the Mahant of the Hanuman temple lying down and was the President of the Akhara Parishad. There was a stir this evening when the news came out that the body of Mahant Narendra Giri was found hanging on the noose.
As soon as the information was received, all the top officials reached the spot and the body was sent for post-mortem. It is not completely clear whether Mahant Narendra Giri, the head of the Akhara Parishad, committed suicide by hanging or was hanged to death. People are expressing all kinds of apprehensions on social media and there is some big conspiracy behind the death of Mahant Narendra Giri, the head of Akhara Parishad. Although the truth will come out only after investigation, but the country is shocked by the death of Mahant Narendra Giri.
It was the Baghambri Math of Prayagraj where his body was found hanging from the fan. The police had told that the room was locked from inside. One of his disciples informed by phone, after which the police team reached. A suicide note was also found from his room. There is a lot of discussion in this about a disciple, Anand Giri. Narendra Giri has written that he was upset.
Anand Giri was expelled from the post of Akhara Parishad and office bearer of the Mutt Baghambari Gaddi. Then both of them also made allegations and counter allegations against each other. All the saints had supported Mahant Narendra Giri. Narendra Giri had said that if Anand Giri apologizes then something can be thought about him. Anand Giri later apologized. However, his expulsion was not returned.
However, the police say that there will be a forensic investigation of the suicide note. In view of the suspicious circumstances, the administration is contemplating about the post-mortem. Forensic team and dog squad have also been called to the monastery. Police officials say that the cause of death will be clear after the post-mortem. The handwriting of the suicide note will also be checked.
Just a few weeks ago, many controversial tweets were made from a fake account named Akhil Bharatiya Akhara Parishad. Narendra Giri had expressed a lot of surprise about this and he had registered a case against unknown people in Daraganj police station.
As the news of Mahant Narendra Giri’s death spread, his devotees from all over the city gathered at the Math. The police had to struggle to handle the crowd.
Mahant Narendra Giri used to hold an important place among the sages for the last two decades. On arrival at Prayagraj, be it big leaders or top police-administrative officers, they have been going to seek blessings from the Mahant and see Hanuman ji lying down. Chief Minister Yogi Adityanath and Deputy CM Keshav Prasad along with other ministers and MPs and MLAs have been reaching the temple and the Banghabari Math.
Recently, DGP Mukul Goyal also went to the temple to worship. Yesterday i.e. on Sunday also Deputy CM Keshav Prasad Maurya went to the temple and took blessings from the Mahant. It is being told that he was under constant stress.
As soon as the news of the death of Narendra Giri comes, there is a wave of mourning in the Sant Samaj as well as in the political parties. Expressing condolence, Madhya Pradesh Chief Minister Shivraj Chouhan wrote that the President of Akhil Bharatiya Akhara Parishad received the sad information about the departure of revered Saint Mahant Narendra Giri Ji Maharaj. The contribution made by Pujya Swamiji, who dedicated his life for Sanatan Dharma, in the welfare of the society will always be remembered. May God rest his soul at his feet.
Samajwadi Party chief Akhilesh Yadav expressed grief by tweeting and wrote that the death of the president of Akhil Bharatiya Akhara Parishad, Pujya Narendra Giri ji, irreparable loss! May God grant the virtuous soul a place at his feet and strength to his followers to bear this sorrow. Heartfelt tribute.