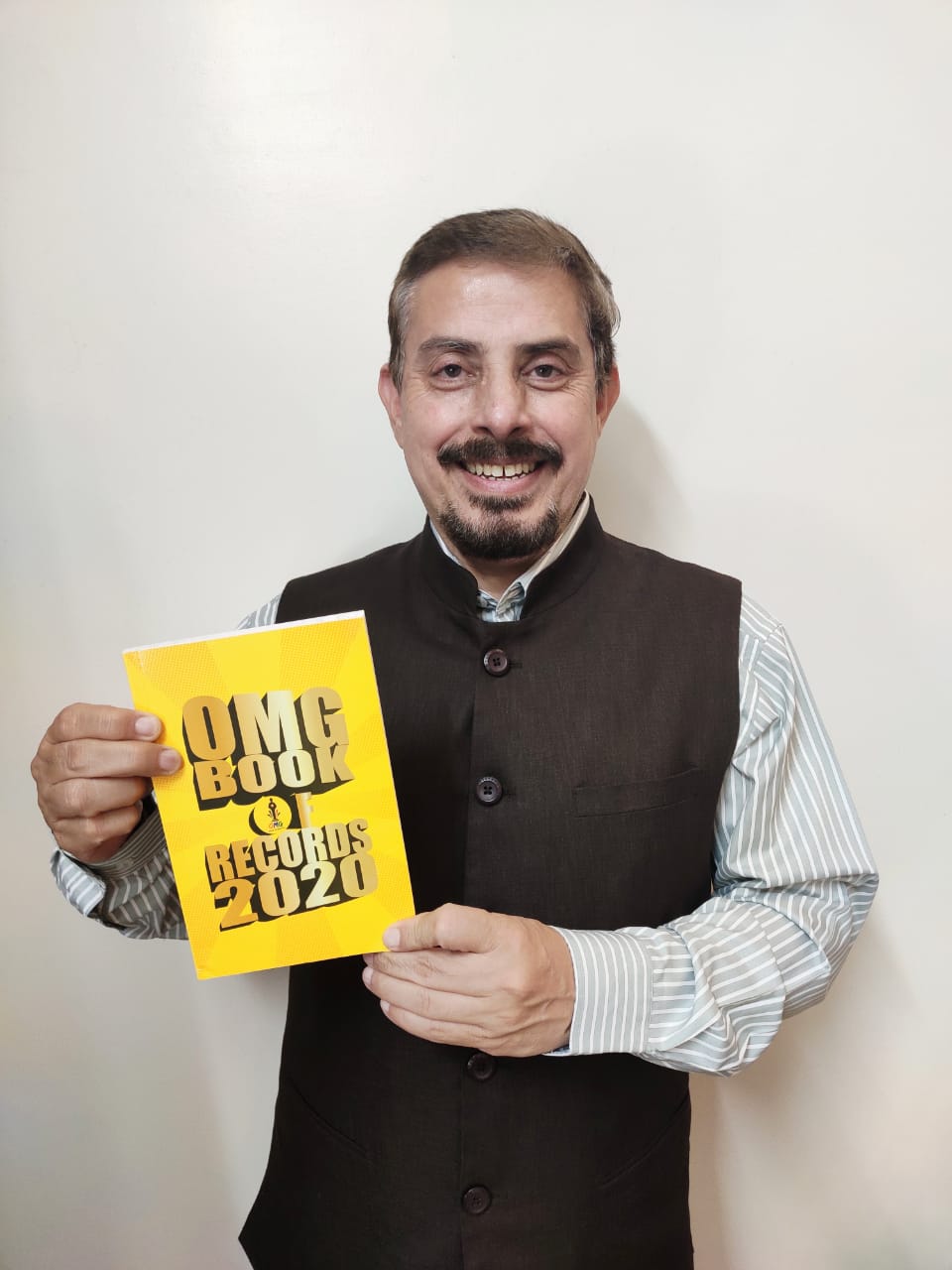 Jalandhar, 18 May (STN) The name of Prof Kunwer Rajeev, multiple memory world records holder, is published in OMG Book of records 2020.The book was released few days back and he received his copy today through speed post. It is an honour for me to have registered my name in another great book, published from Kalyan near Bombay, Prof Rajeev said. Although in this lockdown period nothing much could happen offline, and every activity was restricted to online, but still i am fully ready with eight more world records which i practiced very hard during this period, as per Prof Rajeev. As soon as the things get normalized, he plans to attempt these records during his routine talks and trainings.

He has already seven records to his name in the field of memory in various records books. Some of the prominent books are Limca book of records, India Book of Records, Golden Book of world records, British records book and many more.
He has been awarded many times in different cities of the country along with significant dignitaries of the country.

He has delivered mind and memory talks and trainings to thousands of students online as well as offline. He has simplified these ancient memory techniques to such an extent that anybody can understand them easily in few hours training only.

According to Prof Kunwer Rajeev, our mind is the most wonderful gadget in the whole universe. Most of the people are able to access very little of this power. Every human being should learn how to access this power. They can gain financial, physical, family and spiritual success through this transformation. He has a list of many successful clients who were able to bring huge changes in their lives through his trainings.

In the prosperity of a nation, quality of its nationals play a very major role. He is doing his humble effort in improving this quality. According to Einstein, intelligence of a person is measured by the flexibility of that person to change. His own life changed with in two years by applying certain principles. He wants to share this knowledge with every citizen to bring about the required change.

My message to all the fellow nationals during this pandemic period is that take all precautions sincerely but never be scared. Dont you ever let the fear house in your mind.

He believes mass meditation can totally cleanse our planet earth. Even if out of 700 crore people, 693 crore people do not participate, this meditation can make this earth free from all types of pollution, diseases, viruses and negativities. It can be rejuvenated. This is according to law of superposition of waves in Physics and matter of collective consciousness.

According to Maharishi Mahesh Yogi, “All occurrences of violence, negativity, conflicts, crises or diseases in any society are just the expression of the build-up of stress in collective consciousness. When the level of stress becomes too acute, it erupts into crime, violence, war and social disorder.”

Many experiments in the past have shown positive results of mass meditation. Only one percent people meditating together in a very easy way, at a fixed time for five minutes can transform this whole earth in few weeks. This is also according to another physics law in conductivity. Method can be learned in ten minutes by anyone and can be practiced easily. He is ready to debate on this topic on any platform. A large number of gurus, social organisations, media people need to start this movement. Results will be visible in few days. I am not giving hope but i am confident that this can be done very easily. Once we start this process, nature has millions of ways and means to bring about this change. Humans wisdom is very little in front of that super wisdom.
Lets together renew and renovate our planet earth by giving just five minutes a day.