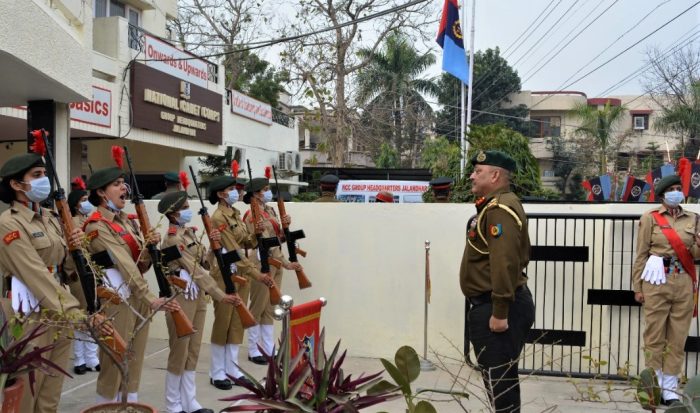 Proud cadets including girls showed their interest in joining the forces. They said their aim to join the NCC was to prepare themselves to join various wings of the Indian armed forces.
Cadet Diksha from 2 Pb. (Girls) Battalion was all jubilant after interacting with Gen. Chhibber. Daughter of an IAF officer she said the General motivated the cadets to follow their passion. “My passion is to become a fighter pilot and I am pursuing that”, said Cadet Diksha whose grandfather had also served the Indian Army as an officer. She wants to become the third generation officer in the family.

Cadet Under Officer Saurav from 12 Pb, Hoshiarpur, a BSC student said that he is dreaming of joining the forces since his childhood and would definitely make it happen.
Other cadets who shared almost the same sentiments to join forces and were felicitated for their servics include NCC Senior Under Officer (SUO) Gurpreet Singh from 2 Punjab Battalion, Under Officer Ritika from 8 Pb, Cadet Naina from 21 Pb., SUO Paramdeep Singh from No.1 Air Squadron NCC and SUO Punnu from Sainik School, Kapurthala.
Later, Gen. Chhibber met all the Associate NCC Officers (ANOs) from various educational institutions in Jalandhar, Hoshiarpur and Kapurthala and lauded their roles in training NCC Cadets. The ANOs include Maj. SK Tuli, Lt. Ashu Dhawan, Lt. Sonia Mahindru, Lt. Kamaljit Singh, Capt. Suresh Kumar, Capt. Amrik Singh, Third Officer Rajan Sharma and Third Officer Ranveer Singh Rana. .<><>