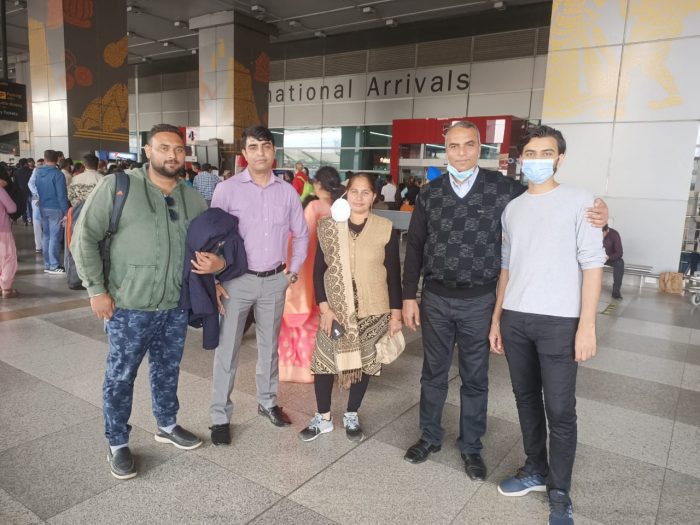 JALANDHAR, MARCH 4:(STN) There was no bound of joy at Karan’s home when he landed safe and sound at Indira Gandhi International Airport, New Delhi on Friday morning along with other Indian students of which eight were from Jalandhar district.
As information of 56 students stranded in Ukraine received at District Control Room setup by the Administration at local Administrative Complex 16 have been returned safely till Friday afternoon.
Karan’s father Gurdip Lal, who is an inspector in Punjab Police at local Commissionerate, while receiving his son said that these are joyous moments not only for them but also for all parents meeting with their wards returning from war hit Ukraine. Student of MBBS third semester at Kharkiv, Karan (22) described about tough circumstances during continuous heavy strikes by the Russian forces. He said that the situation was very worst in the region where they were residing and took a sigh of relief after reaching at borders of neighboring countries of Ukraine. We have reached at Hungary border from where the Indian authorities made their safe return, he added. The Indian officials deputed for evacuation of students ensured all necessary arrangements including food, boarding, lodging etc, which further brought them to New Delhi without any glitch.
Wishing speedy and safe return of other students stranded in Ukraine, Gurdip Lal said that the prompt action of Jalandhar Deputy Commissioner to setup a control room to gather and share this information with the GoI, which further ensured their evacuation.
On arrival of 16 students of Jalandhar district in two phases, Deputy Commissioner Ghanshyam Thori said that of total 56 students 15 had already been reached at Poland border besides six at Hungary border, who were also being brought to New Delhi within a few days. Pertinently, four students of the district were in Romania, one in Germany and three in Slovakia, said Thori adding that seven students had been reached at their homes in district while eight landed at New Delhi and they all were on the way to their homes. Apart from these, one student has arrived at Amritsar whereas seven were still stranded in Kharkiv and Pisochyn and one in Laviv city, he added.
Notably, on Friday’s flight students namely Jaismine Kaur, Sumit Nagrath, Karan Kishore, Anish Kumar Badhan, Gaurav Luthra, Vandna, Harpreet Jassi and Vikram Sharma. The students who had reached at Jalandhar are Gaurav Prashar, Khushwinder Singh, Harjot Kaur Malhi, Maninder Singh, Varun Kumar Harjai, Shivani and Milap Singh while Sameer Hans arrived at Amritsar.
Helpline Numbers for providing info: The district administration also appealed the families, whose members are still struck in the war hit Ukraine, to report information at a dedicated round the clock control room at district level 0181-2224417 and 1100.