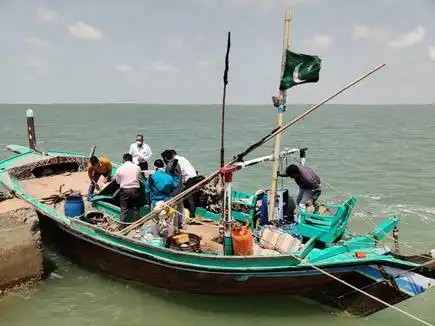 New Delhi:15 April 2021(STN) 8 Pakistani nationals were apprehended from a ferry on the Gujarat coast in the Arabian Sea in the early hours of Thursday and seized heroin worth Rs 150 crore from them. The state’s ATS said in a release that on the basis of an intelligence, a joint team of Gujarat Anti-Corruption Squad and Indian Coast Guard caught the boat in an operation near Jakhau port in Kutch district. The ATS said that the place is located near the International Maritime Boundary Line (IMBL) separating India and Pakistan at sea.

The release said that the Special Operations Group of Devbhoomi-Dwarka District Police and a senior ATS officer had shared intelligence reports of the narcotics being stored in the Pakistani boat with the agencies. A joint team of ATS and Coast Guard apprehended 8 Pakistanis from the boat and seized 30 kg of heroin from them. ATS said in a statement that the value of the seized drug is about Rs 150 crore in the international market.