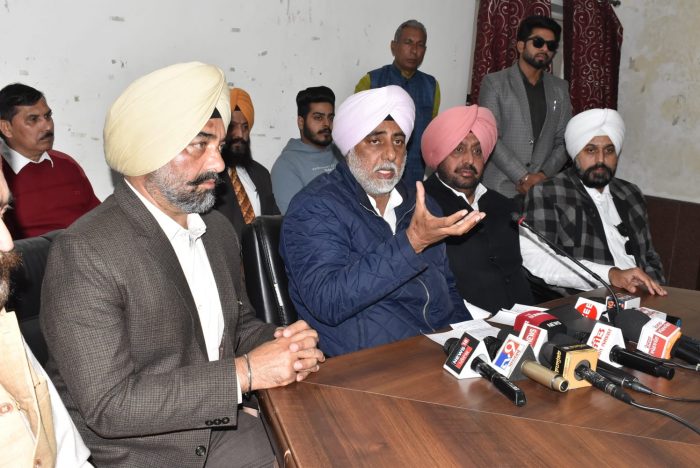 SAYS, VISION DOCUMENT ON CARDS TO TRANSFORM FARMING IN STATE BY NEXT SEVEN YEARS

Jalandhar, November 30-(STN) In a major announcement, Punjab Agriculture minister Randeep Singh Nabha said that the Punjab Government would provide MSP on 113 crops if the center failed to ensure the same.
Interacting with media persons during a press conference held here at the local circuit house, the minister underlined that the Centre should announce guarantee on MSP so that the interests of farming fraternity could be protected. He said that he had already welcomed the Centre for repealing three black farm laws but the Union Government should announce the MSP on crops without any further delay.

Reiterating the state government’s firm commitment to serving the ‘Anndatas’, Mr. Nabha said that it was need of the hour to address the concerns of farmers taking these on top priority. However, he also expressed hope that the center would accede to farmers’ demands of providing guarantee on MSP adding that the agitating farmers would not return until their demands are met.

The agriculture minister further added that the Chief Minister Charanjit Singh Channi led state government has formulated a ‘vision document’ aimed at transforming the farming sector, which would be executed across the state by making six zones. He said that the vision document emphasizes the need of incorporating technology with agriculture so that our farmers can benefit from these techniques to increase and reduce their income and expenditure respectively. The use of drones and other latest equipment would be made to realize this goal, he said, adding that to implement this vision document the state would be divided into six zones. Further, the government was also in the process of joining hands with experts in this field to uplift the farming sector keeping in view the several crops being cultivated in the state.

Expressing deep concern over the loss of lives of over 700 farmers during the agitation against contentious farm laws, the minister said that these lives could have been saved had the union government adopted a humane approach towards farmers. He also said that the Punjab government has provided jobs to the kin of victim farmers in around 157 cases adding that the government has also been considering the request of farm bodies to offer jobs to the family members of another 122 victims as the list of these farmers was provided by these outfits.

The minister also lauded the contribution of Punjab’s farmers in adopting stubble management practices to curb the environmental pollution as the state has recorded a decline of 41 percent in stubble-burning cases this year. He stated that the state government has been making concerted efforts to promote crop-residue management practices and subsidies ranging from 60 to 80 percent on such equipment were being provided to farmers through custom hiring centers.

The minister also mentioned that in order to bring transparency in the disbursal of subsidized agro-machinery, the state government has already launched an online portal which had so far registered a subsidy worth Rs. 13 crore. He revealed that under CRM scheme 2021-22 a total of 1451 farmers have applied for subsidized implements on the portal of which 1278 were selected for draw and under different categories 760 beneficiaries had been shortlisted. Of these, as many as 348 have been procured by the farmers by November 29, 2021, he said, adding that the remaining applications were under process. Earlier the Minister was given Guard of Honour at the local Circuit house on his arrival.