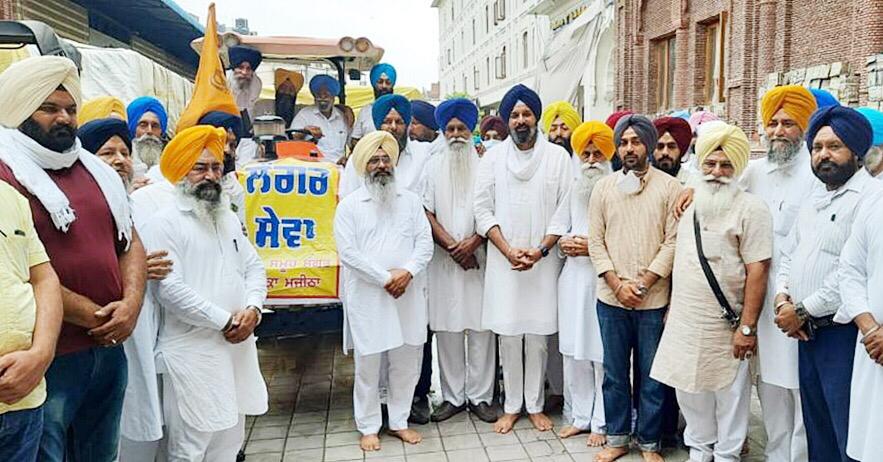 Amritsar, June 13:(STN) Former Minister Sardar Bikramjit Singh Majithia today said that the newly formed Akali Dal-BSP alliance would win the 2022 Assembly elections again and he also said that other like-minded parties would soon join Akali Dal and BSP. Will be part of this alliance.

This was stated by Sardar Bikram Singh Majithia while talking to reporters here on the occasion of distribution of 700 quintals of wheat for langar at Darbar Sahib by the Sangat of Majitha constituency.

Responding to questions from the media, Mr. Majithia said that two major parties with similar ideology have come together on one front. He said that the result would be that this alliance would win again in the 2022 Assembly elections. He emphasized that the alliance between Akali Dal and BSP was a combination of two minds. He said that both the parties had vehemently opposed the three Agriculture Bills in Parliament and Sardarni Harsimrat Kaur Badal had even resigned from the Cabinet in this matter and left the Akali Dal-NDA alliance. He said that Congress party and AAP on the other hand walked out and protested only symbolically while in fact by walking out they directly benefited BJP.

The Akali leader said that the alliance between the Akali Dal and the BSP was determined to ensure the welfare of the farmers as well as the dalits and employees who were being targeted by the Congress government. He said that in the coming days we would intensify the struggle against Minister Sadhu Singh Dharamsot and Balbir Singh Sidhu. He said that it was unfortunate that Chief Minister Capt. Amarinder Singh was defending both the corrupt ministers. He said that while Dharamsot had been accused by the Additional Chief Secretary of his department of embezzling Rs. 65 crore from SC Scholarship, Balbir Sidhu was responsible for the Vaccine and Fateh Kit scam.

Sardar Majithia also emphasized that the Congress government and the Union government in Punjab were discriminating against the farmers. He said that while the Union government had taken a stubborn stand against the farmers and their demand for repeal of the three black laws, the Punjab government was repeatedly raising the VAT on diesel. He said that Punjab government has got additional revenue of Rs.2000 crore from VAT increase alone.
Replying to a query, Mr. Majithia said that it was unfortunate that farmers in Punjab were facing labor shortage in the current paddy season as train services were disrupted. He said that special trains should be run from Uttar Pradesh and Bihar to Punjab to get labor for paddy sowing. He also slammed the Congress government for not trying to stop the workers in the state by providing additional facilities.

Talking about the functioning of the Punjab government, Mr. Majithia said that the Congress leaders themselves were exposing their party leaders and engaging in corrupt activities in the state along with their allies. He said that the Chief Minister had handed over the case against the senior Congress leaders to the High Command. He said that most of all corruption and scams of Congress government were exposed while people would show faith in Akali Dal and BSP front.