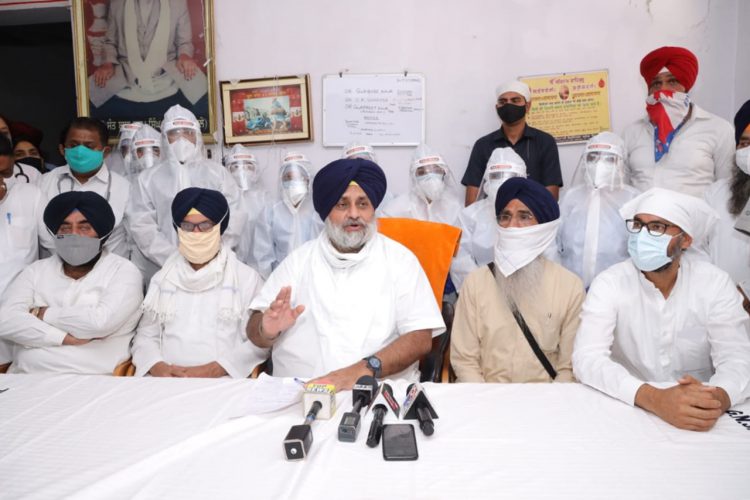 Adampur, May 24(STN) Shiromani Akali Dal (SAD) President Sukhbir Singh Badal today appealed to the party rank and file to hoist black flags atop their houses on March 26 to demand repeal of the three Agricultural laws as well as express solidarity with protesting farmers whose ‘Andolan’ is set to complete six months. The SAD President also requested Prime Minister Narendra Modi to talk to the farmers immediately to resolve all their grievances, saying there is no scope for egos in a democracy and that only dictatorships adopted an intransigent attitude towards the people.

Mr Sukhbir Badal was here to inaugurate the eight Covid Care centres started by the Shiromani Committee in the State at the Guru Nanak Sangat hospital at Kalra village which consists of a 25 bed facility along with oxygen concentrators. SGPC chief secretary Harjinder Singh Dhami, who was also present on the occasion, disclosed that the Committee had deployed 400 medics including 140 doctors, 240 nurses and 12 nursing supervisors to manage the Centres round the clock.

Making it clear that no nation could progress by discriminating against its farmers, the SAD President said farmers had been sitting in dharna on the borders of Delhi since six months in inhospitable conditions to demand repeal of the three black laws and ensure a continuation of assured government purchase on minimum support price (MSP). He said instead of listening to the farmers and resolving their grievances the central government had broken talks with them four months back and was doing its best to break up the agitation by tiring them out. “I want to state unequivocally that the SAD is a representative party of the farmers and poor and will always stand up to support them. I urge party workers to hoist black flags on their houses on March 26 to demand justice for the farming community”, Mr Badal asserted.

Speaking about the Covid pandemic, the SAD President said Punjab had been failed by both the centre as well as the Congress government in the State. He said the centre had failed to provide the necessary vaccines to the State despite its high mortality rate. He said the Punjab government was still in slumber mode. “We can claim victory over their disease if our General comes out to do battle. Punjab needs a bold leadership at this juncture. I urge the chief minister to visit the most affected districts and also direct his ministers to engage with the people directly to resolve their issues like lack of oxygen, medicines and quality medical care”.

Stating that the Congress government needed to reset its priorities, Mr Badal said “the entire focus should be on providing funds for upgrading health care facilities”. He said it was unfortunate that this was not happening. “Earlier when needed the government did not provide school uniforms to students but now when schools are closed the government has permitted Rs 90 crore for this expenditure”. He said the government should pool all available resources to fight the scourge of Covid right now.

Speaking about the work being done by the SAD, Mr Badal said Oxygen Sewa had been initiated in 20 constituencies even as ‘langar sewa’ was being done in 65 constituencies covering Covid patients and their families. He said the SGPC had succeeded in arranging vaccines and would start a vaccination drive soon.