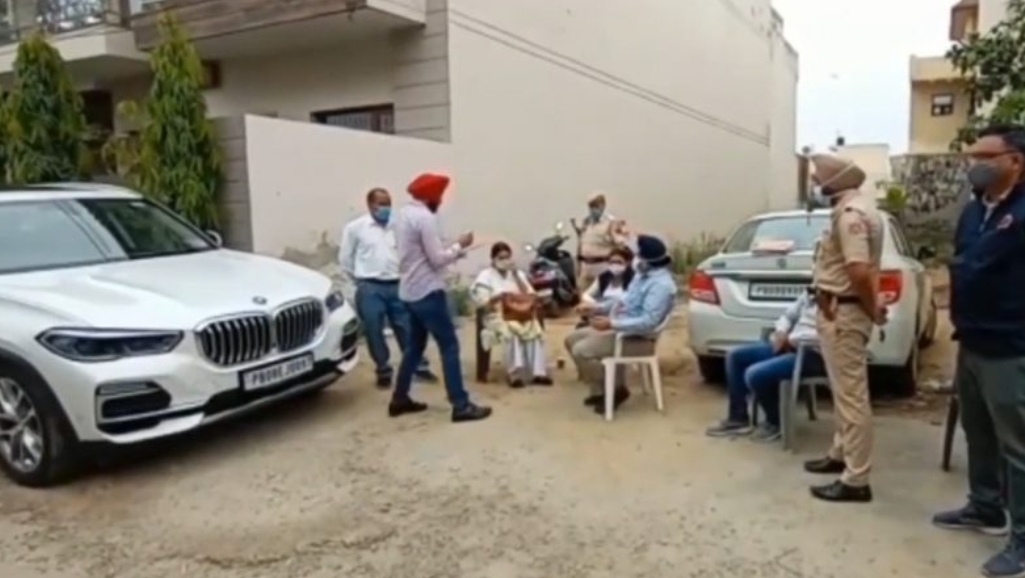 Jalandhar:22,April(STN) On the orders of the Chief Minister, cases were registered against 12 excise officers of Punjab, 4 private transporters and their henchmen under various sections by the Vigilance Department, Mohali to curb the rampant corruption in the Excise Department. After which several people were also arrested but Jalandhar’s DETC B.K. Virdi has not yet been arrested.
There have been constant rumors that Virdi has either fled abroad or has been set up in all the cases, which is why Vigilance is not arresting Virdi. But the vigilance operation this morning took everyone by surprise. A team of vigilance officers and dozens of police personnel suddenly rushed to Virdi’s mansion and cordoned off the mansion. After 4-5 hours of this drama, the vigilance teams finally returned empty handed.
Vigilance officials, who arrived on the scene, declined to comment. But our sources said that Vigilance had received information that Virdi was hiding in his luxurious house in Gyan Nagar, Jalandhar. But even after hours of hard work, Virdi did not fall into the hands of vigilance. This led to shame in vigilance.
According to the information in the case, the chargesheet of the case stated that with the connivance of the officials of the private transport and excise department, the government was being slandered for a long time and crores of rupees were being transported daily without any bill. For this crores of rupees were being paid to the excise officials every month as bribe. When all this was disclosed, the Chief Minister was informed by the Vigilance Department and a large scale operation was started following the instructions received from him. Meanwhile, Vigilance has arrested DETC Simran Brar, ETO Ved Parkash Jakhar Fazilka, ETO Satpal Multani Faridkot, ETO Mobile Wing Chandigarh Ot Shambhu Kalicharan, ETO Muktsar Varun Nagpal, ETO Fazilka Ravi Nandan, ETO Mojira PN. Kumar, ETO Dinesh Gaur Amritsar, ETO Japsimran Singh Amritsar, ETO Lakhveer Singh Mobile Wing Amritsar, Inspector Ram Kumar, Transporter Somnath Phagwara, Shiv Kumar Munshi and Pawan Kumar were arrested. During the interrogation, BK Virdi’s name was also found among the bribe-taking officers and a case was registered against him. But then it suddenly came to light that Virdi had joined Patiala. But did not take charge. The whole puzzle continued. It was later learned that raids were being carried out to find Virdi. On one occasion a raid was also carried out at Seth Hukam Chand Colony in Jalandhar. But Virdi did not fall into anyone’s hands. Today’s action raises questions about the vigilance’s intelligence apparatus. Why Virdi is finally two steps ahead of Vigilance.
SSP Vigilance Jalandhar Range Daljinder Singh Dhillon did not want to be contacted about the whole matter but could not be reached.
There were also reports that when the vigilance teams went to raid Virdi’s house, they had to hear a lot from Virdi’s wife and father-in-law. However, the police could not break the locks of Virdi’s house and could not search him due to lack of search warrant.